Impression of the Patchwork and Quilt days in Rijswijk, The Netherlands

10 Year BeColourful, an impression of a stunning quilt show

Scroll down for the following articles about BeColourful in a variety of newspapers and magazines:

"Künstlerporträt; Jacqueline de Jonge"
Article in a German Quilt magazine; 01/2015: Patchwork Professional with pattern: "Sweet Melody".
"Jacqueline de Jonge, 10 year BeColourful"
Quilt & Zo; no 29, 2014; a 8 page article with pattern: "Sweet Melody"
"10 year BeColourful; an anniversary full of surprises"
Handwerken zonder Grenzen; no 183, 2014; a 5 page article by Monique Bons
"Peacock Gold" fabric challenge fans creativity
The Daily Sentinal; Sunday, September 15, 2013; by Sherida Warner
Catch me... If you can! The story
The QuiltLife; February, 2012; by Ricky Tims & Alex Anderson
It was love at first sight
Eva Magazine; July 2009; by Inge-Mirjam Bosveld-Ester
Move over Delft pottery, move over Vermeer–there’s a new artist in town and she’s designing quilts.
American Quilter; Summer 2007; Deft Quilter from Delft; by Marjorie L. Russell
How it all started
Nederlands Dagblad; May 21, 2005; Colourful quilts are in great demand and not only with family; by Christien Manni 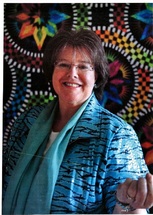 Jacqueline de Jonge discovers the art of quilting
﻿‘It was love at first sight’
She remembers it like it was yesterday. It must have been in 1978. In a book store Jacqueline de Jonge’s (48) eye fell on a quilting magazine and it was love at first sight. “I tried to find the fabrics myself. In the end it took me two years before my first quilt was finished.”
Now, some 31 years later, Jacqueline creates and designs her own quilts. Her designs are sold all over the world and are a big success, especially in the US. American quilters travel to the other side of their country to attend workshops by the Dutch extraordinaire, Jacqueline de Jonge. In short Jacqueline is ‘hot’ in the quilting world.
Success story
However, it wasn’t an instant success story. In her daily life, Jacqueline is a medical secretary at a cardiology department in a hospital. She enjoys her work a lot, but Jacqueline is a perfectionist. She enjoys being a conscientious working with eye for detail. In 2003, this took its toll and Jacqueline suffers from a burnout. “I had to stay home for a couple of months. That was a difficult period, but I noticed that working on the quilts made me calm and relaxed. Quilting brought happiness back into my life.” Her perfectionism equips her to deliver beautiful quilts. “Everything comes together in quilting. I can just let myself go when I’m quilting”. 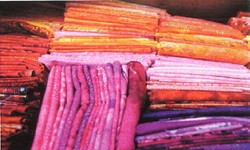 They placed an order for 400 designs. Jacqueline starts copying the designs with help from her family. When more and more orders keep coming in, she decides that she has to manage it more professionally. Now more than 110 stores sell her designs in the US, Canada and Germany.
Sparkling eyes
As soon as Jacqueline starts talking about designing quilts her eyes sparkle. It is her big passion. “I can talk about it the whole day and do it 24/7. I often get inspired by the fabrics. The colour, the shape, even the hubcap of a car can inspire me. I work a lot with round shapes. My quilts have a high difficulty level, they have to be a challenge. I start by making a sketch. My brother in law translates this into a digital version on the computer. I already have the basic fabric in mind when I receive the design at home. I place the fabrics on the table and then the process starts. I don’t have to think about it, it goes automatically. I play with the fabrics and run to the sewing machine. In three weeks I am done with the top layer.

This year she travels to the US five times to give workshops and show her work at exhibitions. This year Jacqueline won the Colour Trophy 2009 again in the European Championship. But she stays humble: “I received my talents from God. When I introduce myself at the start of a workshop I tell people this. I am not a preacher, but I hope I can make people think about it. I want to give people happiness through my work and worship God in my own way.”
Images: Ruben Timmerman Translation: MiekeSnijder

Nederlands Dagblad; May 21, 2005; Colourful quilts are in great demand and not only with family; by Christien Manni 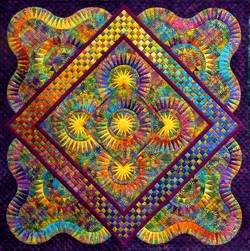 Sometimes a person is at a cross road. The road you take can lead to great consequences. For Jacqueline de Jonge from Delft one of those moments came along in March of 2003. A small article in the Dutch Daily about a European Quilt Exposition in Waalre would change the course of her life.

Jacqueline de Jonge had already been quilting for years, and family and friends were generously supplied with colorful wall decorations. But to bring it out into the open; she had never thought about that. Until she saw that little article in this newspaper. Before she knew it, she was already looking for the right fabric and designing something that was growing in her mind and on the wallpaper.

Seven weeks of intensive measuring, cutting and sewing followed. The result was a quilt from which the colors jumped off, full of joy. In the fall of 2003 her work piece was hanging at the exposition with the very appropriate name of “Joy”. And not only that, she even won a price for the best color combination. 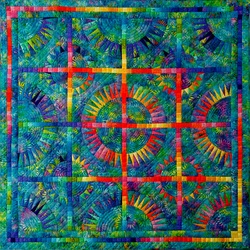 "New York beauties"
One thing would lead to another, an exposition here, admiration there and the demand for patchwork patterns to recreate her quilts. Jacqueline’s quilts have their very own style. With remarkably many peaks running up into triangles, the so called New York beauties, many small surfaces and a beautifully balanced colour choice. When a quilt hung in a store display, you could bet that people would ask for the pattern.
Last year in April Jacqueline started her own small business: Be-Colourful. That meant a new challenge: how do you work out your patchwork patterns in such a way that they will be clear to someone else and look professional? How much does it cost, how many do you make, and how do you advertise? Everybody in her environment helped her: a retailer gave her some tips, a brother-in-law made the designs on the computer and both her parents were indispensable with practical help and advice.  Jacqueline’s patchwork patterns are now available for sale on the internet and they are also available at 19 retailers throughout the country. Business is going well: at the European Exposition last fall a great quantity of packages were sold.
Her life gets busier. The down side of good business is that you have to keep up with it at all times: go to the copier, fold, and pack, send it off. At least she finds the time to design new patterns and to cozy up at night in a lazy chair and do some quilting. Because the joy of working with the fabrics is still the most important to her.

Holiday Cloth
In her cozy apartment in Delft, Jacqueline tells her story. Ever since she was a young girl she had always been creative, without specifically having the feeling that her talents were in that area. When she was about 18 years old, she started with patchwork and quilting. Jacqueline is a self-made type, and the technique was self taught step-by-step.
Her first quilt was pink and blue, done with a coarse stopper needle and obviously a beginner’s quilt. This quilt, even after having faded because of the many washes, is still used as a holiday cloth by her sister’s family. Slowly on, it went better and better, she bought the right materials. Striving for perfection is not unfamiliar to her; she has always been critical of her work. However, according to Jacqueline, you have to be critical if you want to make a beautiful, taut cloth without disturbing deviations.
After a vacation in Australia she had such an abundance of fabrics, she couldn’t find enough interesting patterns. So she started to design her own quilts. Lots of wall paper was used because it is the ideal material to draw a patchwork pattern on.  Those rolls of wall paper, preferably made of vinyl, she still uses them. Once she starts making a quilt, there is no stopping her.
She makes the right colour combinations for each quilt on a large flannel board. She assembles it, sewing the pieces together on a sewing machine, following the paper pattern, the so called paper piecing. The real quilting, the “kernel”, is done manually. She can sit in her favourite chair for hours, while the quilt grows under her hands and she enjoys listening to classical music via headphones. It can’t get any more relaxing than that. 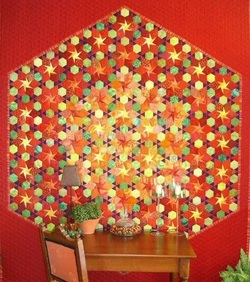 In full blossom
When asked if her way of working is considered to be the free traditional art of quilting, Jacqueline says that she works with the traditional patterns, but then in a modern twist.  She doesn’t make small quilts; she prefers working on a large scale. Her newest quilt, Twinkle star, is a huge wall hanging with a hexagon full of colorful small figures against a red background. A quilt which once again expresses her feelings for colors.
The biblical terms for many patterns, like the Jacob’s ladder, do not mean much to her; to her they are empty terms. Quilting does relate to her religion. Not too long ago her life seemed to be consisting of loose threads; lately those same threads seem to be braiding themselves together. She feels great, now that she experiences that being creative is more than just a hobby.
The talents she received from God are suddenly growing into full blossom. She has set a deadline at April of 2006 to see if it is useful to continue with her small business and the quilting. If things go well, she might be able to work less and dedicate more time to it; if it is disappointing at least she tried and gave it a chance.

Houston
Until now all goes well. Jacqueline has been invited to go to Houston next fall, to the trade show for the middlemen in the area of quilts. If you think about the fact that in America alone there are some 21 million quilters and a large demand for patterns for experienced quilters; there must be a market there for her designs. There are remarkably many reactions on her website from America and Canada. The preparations for her trip to America have already started. Fortunately, her brother has planned on going with her to assist her with the business part.
To readers who have already started on the quilting path, her advice is: first, go to a basic course on patch working and quilting and enjoy relaxing with this hobby which you can do at any time of the day. And almost every town or city has a group of enthusiastic quilters and the possibility to attend a course. Jacqueline herself gives a workshop once in a while on designing a quilt or dealing with the difficult corners.

All designs, patterns, images and text are © 2004-2023 copyright BeColourful; by Jacqueline de Jonge. Reproduction of any kind is expressly prohibited without written consent.
Website by Ontwerpstudio RIEMER